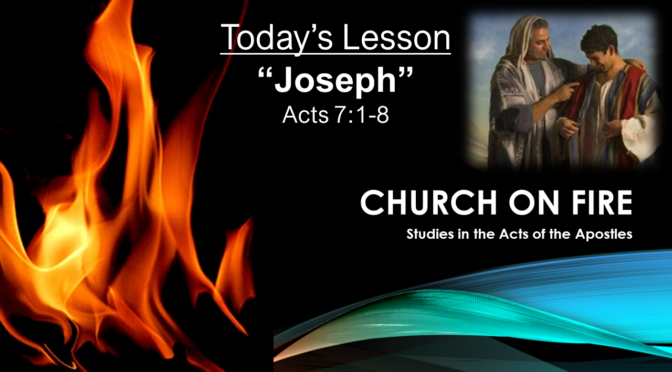 We all make plans: plans to do something, plans to not do something or plans to do nothing at all. As Winnie the Pooh is quoted in Disney’s movie Christopher Robin, “People say Nothing is Impossible, but I do Nothing all the time!”

From his earliest days Joseph knew that he was part of a plan that was larger than himself (Genesis 37:1-11; 41:16, NLT). I believe that his knowledge of God’s plan…however vague it may have been to him…was the force that sustained him through his troubles in life.

Favored by Jacob, his father, Joseph was given visions of God’s plans for him early in his young adult years. It was these visions that led him to be treated harshly by his brothers who wanted to kill him. Instead, they sold him to slave traders who, then, sold him to Potipher in Egypt (Genesis 37:12-36).

Falsely accused by Potipher’s wife (Genesis 39), Joseph was imprisoned for more than two years (Genesis 41:1) before the figurative visions of his youth began to materialize for real in his adult life (Genesis 41).

How could the religious rulers miss this truth? Hence the purpose of Stephen’s illustration about God’s activity outside of the Holy City and the Holy Temple that would be razed to the ground in only a few more decades. Abraham, Jacob, Joseph and Moses all dealt with a God who came to them long before they could come to Him!

LUKE’S POINT TO US

God has always been and presently is and will ever continue to be working out His plans for His universe, down to the smallest detail. He is not limited by our plans. In fact, in the lives of the great men Stephen lists in his argument, God’s deliverance came out of the midst of their suffering. This leads to the following observations.

GOD’S WILL AND SUFFERING

May God give us the vision of Joseph that we may trust in God’s leading through all of the challenges, setbacks and opportunities that come our way. May His will be done in our lives so He can use us as willing participants in His glory, not in spite of the hardness of our own hearts.

If there is one place where Winnie’s motto makes no sense it is in the realm of our God, Whose plans are perpetually unfolding according to His will, no matter what.